What would a baked potato be without cheddar cheese?  Or scalloped potatoes without those delicious crispy bits of cheese and potato that you’re determined to pry off the side of the casserole dish?  And then there’s those cheese fries you sneak at the country fair, or the homemade potato bread topped with cheddar…. Yes, what a delectable match this is.

This Loaded Baked Potato Soup makes the most of this match.  If you like the way cheddar and a baked potato complement each other, this soup has all that flavor and more.

The first time I made this soup, I cut the recipe in half.  After all, my fridge was getting full and I didn’t think I could throw a creamy potato-based soup in the freezer.  At the time, it seemed like the responsible decision, but two days later, I was roaming the house, craving more of it, digging around in the fridge, and not uncovering that storage container I was hoping to see.  I was amazed at how delicious this soup was.  (My husband then pointed out that a soup made with heavy whipping cream and topped with cheddar cheese and bacon was bound to be tasty.)

I’ve since tripled the recipe to serve to a large group of college students.  It provides a good, hearty meal for a crowd and, good news for the cook, you can bake the potatoes a day ahead.  And, on days when you have leftover baked potatoes lazing around, let them find a new occupation as ingredients in this soup!  Vegetable odds and ends can also find new meaning in life as the basis for an easy homemade vegetable broth that serves as a base for this soup, making this soup quite frugal as well as delicious.

When dinner time rolls around, round out the soup with a side of steamed broccoli.  Since broccoli works so well with baked potatoes, it’s a worthwhile healthy side for this soup. 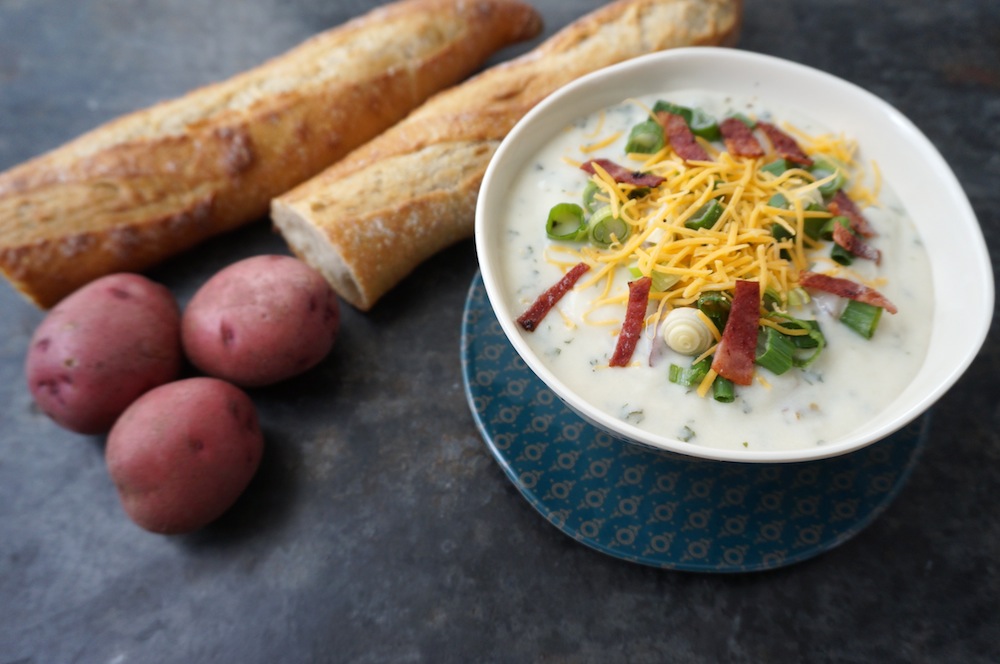