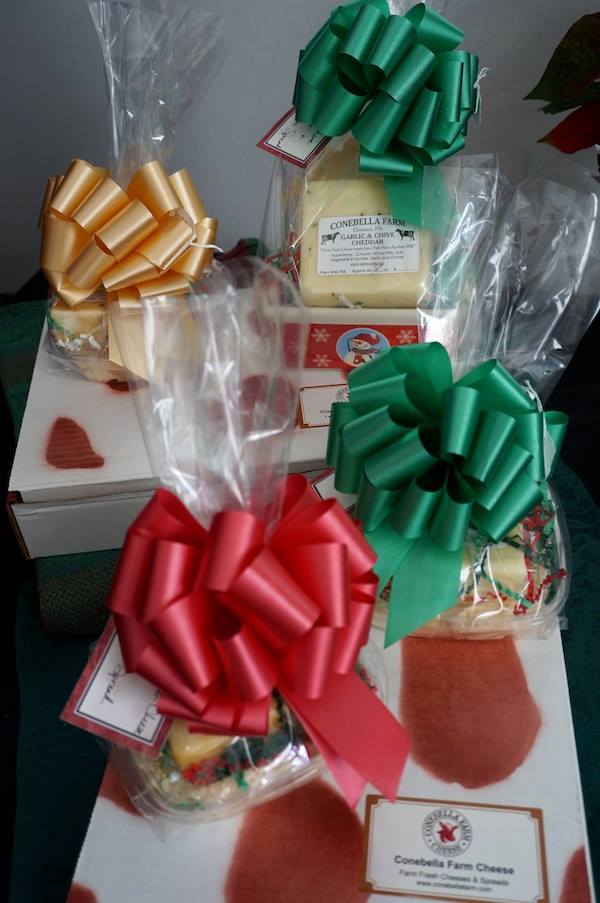 They began selling cheese for Christmas in December 2007 but did not yet package the blocks in gift boxes.  The year after that, they began making artisan cheese spreads and started to package them in plain white gift boxes.  They also began to offer snack packs: a delicious cheese block and a rich spread wrapped together and decked out with a cheerful holiday bow. 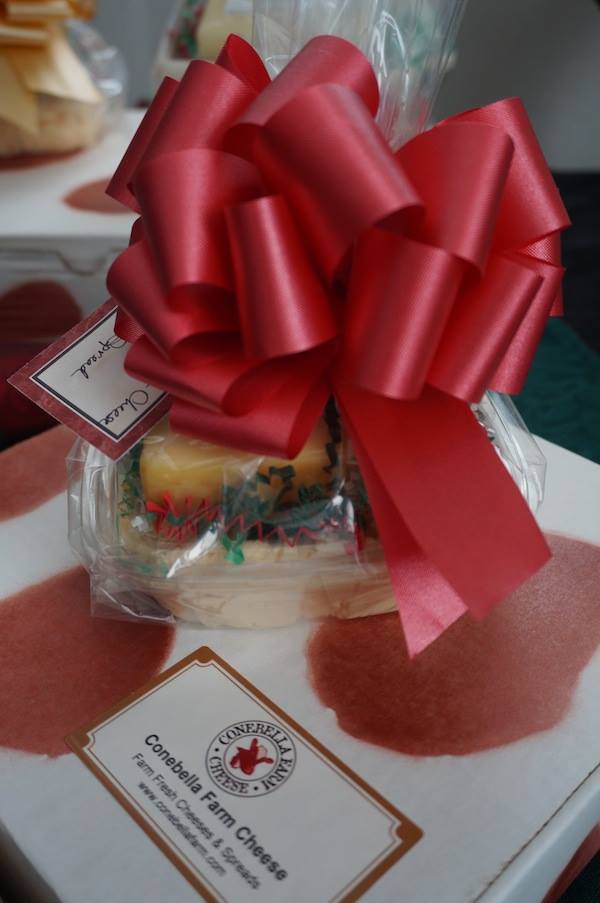 In 2010, one of Pam’s friends suggested that they make the cheese boxes even more distinctive by painting them with a cow pattern.  It was a great idea!  Now, every September and October while the weather is still warm, Pam brings out her handmade template and spray paints a cow pattern onto the boxes. 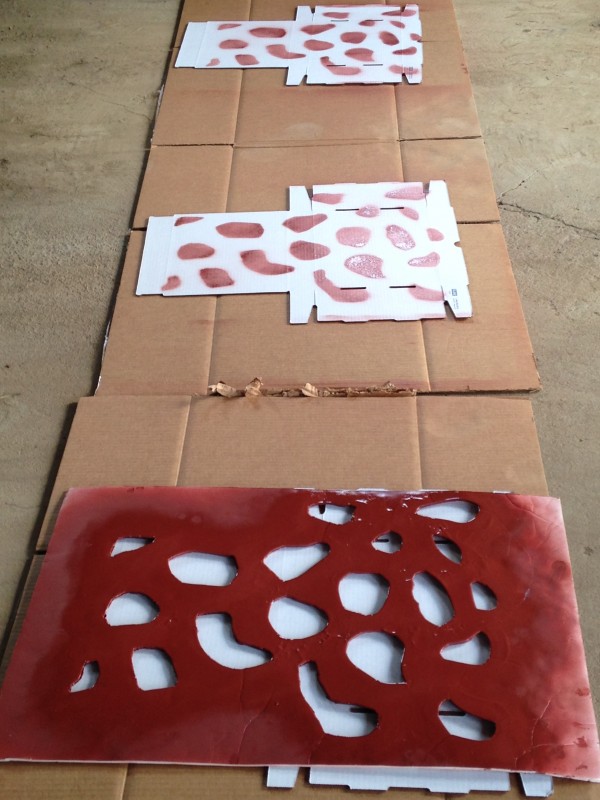 She tried five different paints until she found a color reminiscent of the color of most of their cows. 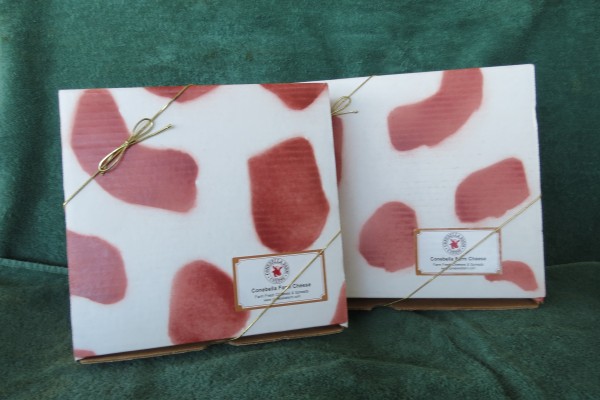 Painting the boxes is just one part of getting a head start on the holiday orders.  Around October, the Gables are also checking the inventory and making sure they have enough bows, boxes and all the creative finishing touches that make each gift pack unique. 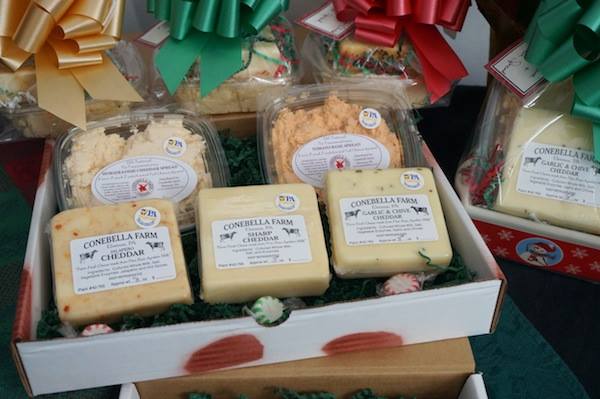 Each year, the Gables add a new type of holiday gift bundle.  In 2012, Pam’s mom noticed some beautiful reusable ceramic loaf pans in a catalog, and they started crafting Muffin Pan Snack Packs, perfect for baking apple or zucchini bread and spreading it with rich, buttery Conebella Farm Cheese spreads. 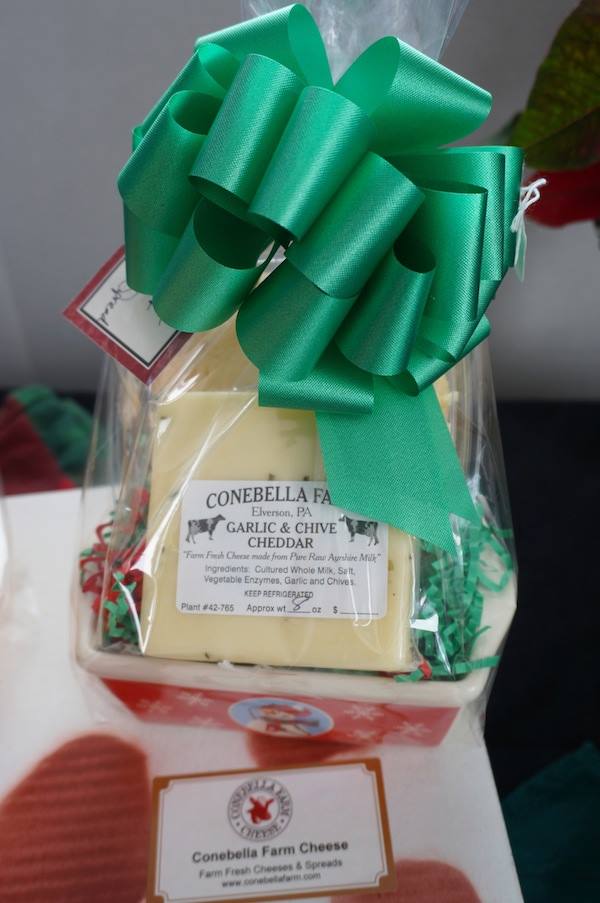 This year, for the 2014 holiday, Pam’s mom discovered another holiday package, the whimsical snowman boxes that they now use for the Snowman Treat Boxes.  They are especially handy if your hands are full of gifts–they have a handle at the top! 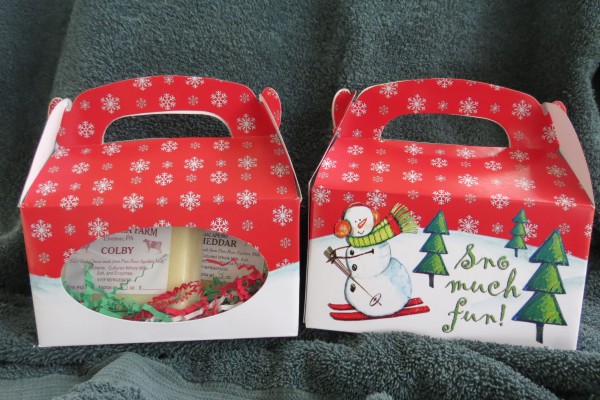 This year, Conebella Farm Cheese now offers five different holiday gift packs in a range of sizes and prices, so that it is easy to pick out a gift to bring to a party for the host or hostess, to give to co-workers or employees, to bring to gift exchanges, or to delight family and friends.  Pam has noticed that people are often looking for gifts that won’t just sit around and become more “stuff.”   With Conebella Farm Cheese, this gift won’t be sitting around long at all before someone devours it!

All packs that are ordered ahead of time are made up especially to fill the order.  There are also several packs ready to go just in case you didn’t place an order but are looking for a wonderful last-minute gift to take to a party.  Just swing by the store and grab one of these ready-made packs filled with Conebella’s most popular cheese varieties.

Speaking of holiday parties, they’re a sign that Christmas is fast approaching!  Order by December 17th for Christmas delivery.  At this time, we are only able to ship cheese blocks, so if you would like to give the gift of our delicious preservative-free spreads, pick them up at the Conebella Farm store store or at upcoming holiday markets.

As you shop and plan for your Christmas gifts this season, give thoughtful, handcrafted gifts straight from a local family farm!