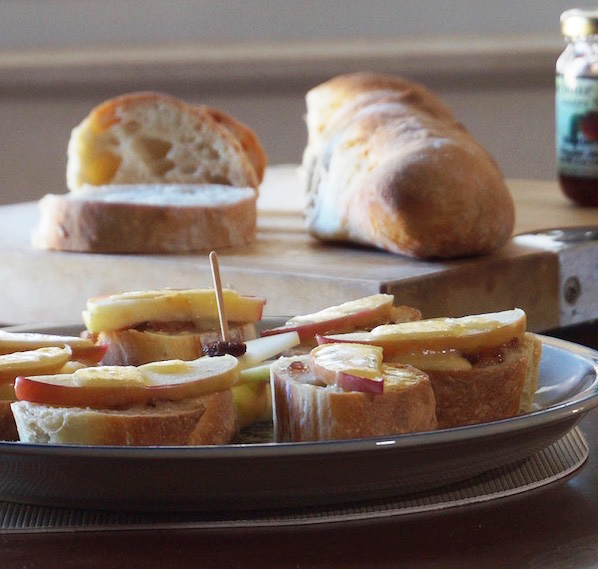 I’ll make a really easy blog recipe this month, I told myself. A quick appetizer you can throw together in about five minutes.

So that’s what we have this month. These cheddar, apple and pepper jelly toasts really are so easy you might as well add them to your list of appetizers to have at every party!

It’s just some quick slicing: slice a baguette, your favorite kind of apple and some Conebella Farm Cheddar, Sharp Cheddar or Smoked Colby. Then spread pepper jelly on the baguette slices, layer everything together and pop it in the toaster oven till the cheese melts.

Done! No need to send your spouse or child or friend to answer the door while you’re still in the kitchen glaring at tangled puff pastry sheets or sneaking out the back door to buy a suitable substitute for the appetizer that stuck to the bottom of the pan. This appetizer offers complex flavors with simple prep.

There is an alternate way of making these that amps up their deliciousness and takes a mere, hmmm…. 18 hours?

The alternate way is to make your own baguettes. It’s longer, it’s more of a hassle, but it’ll also make you feel like you’ve never really tasted a real baguette before.

And, chances are, it will be much healthier. Have you looked at the ingredients list of store bought bread recently? Most grocery store bread, even “from-scratch” varieties sold in the bakery section, will have a long list of ingredients, including preservatives like calcium propionate, and “dough conditioners” that often have an ingredient made with human hair! It can be so hard to find well made bread that I have simply started making my own. Making things slowly, whether it is bread or artisan cheese, is worth the effort because of the dividends they pay in terms of health and taste.

And for all this reward, making baguettes is not actually that difficult. Time consuming, yes. But difficult? No. At least, not difficult the way, say, sculpting fruit to look like woodland animals is difficult. It’s just a long series of simple steps.

Ready to create something awesome in the next 18 hours? Here’s the recipe. 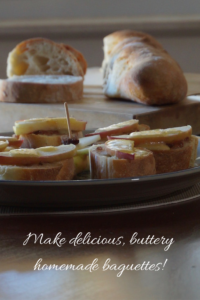