People ask Pat Laughman, Pam Gable’s mom, “Is there anybody you don’t know?”

Pat’s network comes in handy when she sells cheese.  She says people figure, “I know her.  I’ll buy cheese from her.”  It’s about trust, friendship and support for their own community.

And if people start out as strangers, they don’t stay that way for long.

“I’m kind of an outward person,” Pat laughs.  “I can make friends with anybody.”  Recently, she and her husband, Pam’s stepfather Paul, attended a Penn State game and Pat befriended the people sitting in front of them.  “Do you know them from somewhere?” her husband asked.  Nope, she’d never met them before, but they’d become well acquainted during the course of the game.

Pat’s network and her winsome, energetic personality both came in handy when Don and Pam began selling cheese seven years ago.  Immediately, Pat took on the role of “central Pennsylvania distributor.”  Immediately, she thought “wine and cheese!”  What could be more natural than a winery selling cheese?  She contacted Hauser Estate Winery, a gorgeous winery set high on a hill in Gettysburg, and they were the first central Pennsylvania business to begin selling Conebella Farm cheese.  Now there are seven!

As Pat introduces Conebella Farm Cheese to local businesses, her manner is friendly and easygoing.  She knows this creamy raw milk cheese will sell itself.

She’s been known to pop into any business that seems like a good fit and ask, “Did you ever think about selling cheese?”  When she posed this question as she bought tomato plants at Sandoe’s Fruit Market in Biglerville, she also noticed that they’d just installed new refrigerators and were selling milk.  Since Sandoe’s dairy section was already expanding, it was perfect timing for them to start selling cheese as well.

Selling cheese keeps Pat in close touch with Pam and Don.  When she visits them every two or three weeks to restock her inventory, she tours the farm and enjoys mother-daughter lunches with Pam.

Pat’s enthusiasm for connecting customers with Conebella Farm Cheese comes from a deep respect for Pam and Don’s work.  Pat and her late husband Vern, Pam’s father, both grew up on farms and Pat knows the long hours and hard work involved.  When Pam met Don at Penn State and they married and began farming together, Pam told her mother that the dairy farm was different from the farm Pat knew from her youth.  “All we have are cows and cats,” Pam told her.  Did she mention those cows numbered 200?

Conebella Farm was certainly a busy place, and Pat knew Pam was cut out for it.  “Pam is a worker,” says Pat.  Pam was “born and raised” in business, learning from her mom and dad as they ran the service station.  In high school and college, Pam was “an excellent student,” highly self-motivated, which has served her well as she and Don and the family have built up the raw milk cheese business.

Pam’s mother’s support has expanded Conebella’s distribution throughout Adams and York counties.  The rest of her family join in distribution as well.  Her stepfather, who has worked at Utz Snacks for over 25 years, lets coworkers sample the cheese in the lunchroom and helps Pat with the legwork, loading and unloading heavy boxes of cheese.  Pat’s son Jeff and his wife Jacqui work for the school district and run Null’s Liquid Chlorine, selling pool supplies.  At the store, they sell the cheese.  At the school, they take orders around the holidays.  Around the holidays, Pat’s son George and his wife Alicia give Conebella Farm Cheese as gifts to George’s co-workers and to their daughters’ teachers. 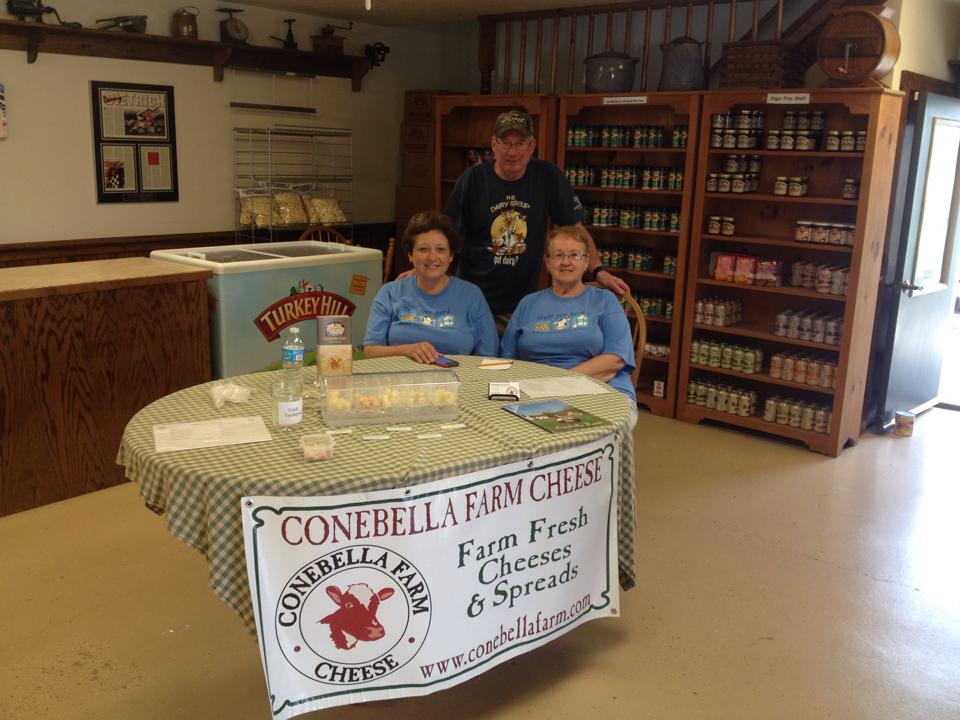 On the farm, Conebella Farm Cheese is a family business, with Pam, Don, their sons, and Don’s mother Josephine all working together to care for the herd and the land. And over 70 miles away in central Pennsylvania, another branch of the family is hard at work.  The hard work that Pat Laughman and her family have contributed to their community for decades has built trust and established friendships, and, with Pat’s natural ability to put people at ease, the circle of friends keeps growing.